Elliot Tigerlily and Talia Rose with baby daughter Grace and son Zack, at their new store, Organic Grace, in Garberville’s Sentry Center. The store, inspired by Grace’s birth, carries non-toxic beds and other products for the home.

For Talia Rose and Elliot Tigerlily, having a new baby meant giving birth twice. Their alarm at the widespread use of toxic flame retardants in baby beds and other products fueled the inception of their new store: Organic Grace, Non-Toxic Options for Healthy Living.

The shop, located in Garbervile’s Sentry Center, features non-toxic beds, organic cotton clothes, bedding, and Safecoat non-toxic finishes — paints, stains, sealants, and caulking. This is Tigerlily’s first experience in retail business, but Rose previously owned and operated the nearby Kidz-N-More for seven years before selling it.

They named the business for their 1-year-old daughter, Grace, and their quest for a non-toxic environment for her. “I was shocked that they coat everything for babies in carcinogenic chemicals that are banned in other parts of the world,” Rose said. Tigerlily’s research found a study in New Zealand that linked the flame-retardant chemicals to Sudden Infant Death Syndrome.

The couple shopped online for an alternative mattress and found all-natural non-toxic beds which use organic cotton covers, organic cotton, wool or natural latex fillers, and a natural flame retardant, wool. But, like a lot of natural-fiber products, organic beds are very expensive. “They’re out of our budget and out of a lot of our friends’ budgets,” said Tigerlily. “So we decided to try to make them available cheaper. The most expensive organic mattresses we found on the internet were $2,700. We’re offering them at a substantial discount, so that people on a tight budget like us can afford them.”

Tigerlily and Rose stressed the importance of organic cotton. “[Conventionally grown cotton] is one of the most heavily sprayed crops in the country,” said Tigerlily. The store carries organic cotton bathrobes, T-shirts and socks, and organic cotton blankets.Wool is another natural fiber the store features; in addition to being a natural flame retardant, the small amount of lanolin left in wool makes it antibacterial and resistant to dust mites. Organic Grace carries wool comforters, and is searching for woolen long underwear.

The couple is interested in adding a line of full-spectrum light bulbs, the closest thing to natural sunlight. These, Tigerlily explained, can help people who get “cabin fever” during the heavy rainy season. To avoid the toxicity of plastic water bottles, Organic Grace carries stainless steel water bottles.“We want to work with people to help find non-toxic solutions for people who don’t have a lot of money,” Rose said. “There are things you can do to make your house less toxic. ... We’re willing to get products we don’t have that they’d like to see available locally.”

Acknowledging that organic products often cost more than their “conventional” counterparts, Rose emphasized that buying organic is an investment in better health — not just the consumer’s, but that of the planet as a whole. “When you’re buying something organic, you’re not just getting something for yourself, you’re doing something for the planet. You’re reducing the number of pesticides and herbicides and making the environment safer for humans and animals.” 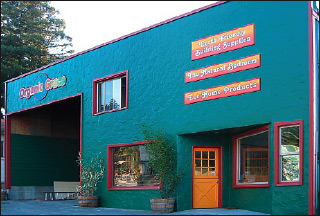 When Talia Rose and Elliot Tigerlily first opened a business devoted to organic, baby-friendly mattresses and bedding, little did they imagine that — just a year later — they would be moving into a considerably larger location, adding a number of product lines, and looking forward to expanding both their walk-in and Internet business. Since fall 2005, when they opened Organic Grace, they have discovered that what was once a fringe of people dedicated to “living green” has become a burgeoning mainstream movement towards thinking and living in harmony with the planet.

Rose and Tigerlily were first driven to open the store when, while trying to build a non-toxic nursery for their newborn daughter Grace, they were presented with the challenge of tracking down earth-friendly (and human-friendly) cribs, mattresses, bedding, clothing, paints, toys — in essence, everything an infant would need. Organic Grace began as a niche business that quickly expanded into other green products, as Rose and Tigerlily immediately discovered that customers were also looking for environmentally- friendly building materials, cooking utensils, furniture, and common household cleaning products.

In just a year, the couple have expanded the business so much that they have moved into a new location, formerly occupied by Hand to Land. “It started as a fantasy,” Rose laughed, “the idea of moving into this great space. But then we talked to the owner [Scott Downey], and he was totally into what we were doing and really supportive of it, so he agreed to do a two-year lease option.” The downstairs now features the main retail space, which is open, airy, and very inviting, while the expansive upstairs houses a warehouse space, Internet shipping area, offices, a kitchen, and a playroom for Grace. The couple, who live in Piercy, also have a 14-year-old son, Zack.

A Market for Clean Living

Rose was first exposed to customers’ concerns about chemicals and allergens when she owned Kidz-n-More in Garberville in the late 1990’s. “I spoke to a lot of people who had trouble with the chemicals in so many everyday products, and with their kids’ being exposed to them,” she said. In the last several years, mainstream media have paid closer attention to the skyrocketing rate of serious allergies among people in the developed world, a phenomenon that many scientists attribute to the pollutants and toxins that permeate the environment. For example, the October 2006 issue of National Geographic features an article titled “The Chemicals Within Us”; the piece questions whether there is a balance between the benefits of products such as flame retardants, and the increasing body of evidence indicating that man-made materials and compounds adversely affect health.“

What’s toxic in adults is 15 times more toxic in children,” Rose explained. “The chemicals used in mattresses, especially, are really bad. They’ve been found in mothers’ milk and in cord blood, so children are literally being born having already been exposed to toxins in the womb. And when you start with changing your bedding,” she continued, “you’re already sharply reducing that exposure — after all, you spend a third of your life sleeping.” In addition to mattresses, organic cotton sheets, sleeping mats, and baby clothes were part of Organic Grace’s offerings from the beginning, and still continue to sell well. The store also carries eco-friendly toys, herbal children’s medicines, salves, and soaps.“

The response was just great” after the store first opened, Rose continued. She and Tigerlily then began offering Safecoat products in the store, after finding that customers had a keen interest in environmentally-friendly paints, primers, and sealers. In addition to the Safecoat line, they have added “real milk paint,” said Rose, “which is great; you don’t even have to prime. It’s what we used on our steps [in the new location].” Organic Grace is also carrying American Clay plasters from New Mexico, which are troweled onto walls for a distinctly Southwestern (or perhaps Mediterranean) look.

A great advantage of the Safecoat products is that “they’ll seal in toxins and lead paint,” explained Tigerlily, who added that the store has had customers from as far away as Oregon and the Bay Area. They have recently purchased a tinter, so customers may now purchase custom-tinted Safecoat paints as well. For those looking to seriously remodel or build from the ground up, though, there are also plenty of choices: the store is carrying several lines of earth-friendly flooring, including bamboo; cork “from oak trees that are never felled”; sustainably-grown and -harvested hardwoods; and “true linoleum, which is made partly from linseed oil and doesn’t have all the chemicals added to it.”

Rose and Tigerlily plan on offering workshops on installation and usage of the green materials they’re selling, which also include Ultra Touch recycled denim insulation — “no more itchy fiberglass!,” Rose laughed. “We get five to seven calls a week from people interested in it; I was amazed to discover that you couldn’t get it anywhere near here, and people were going to Grass Valley, Santa Rosa, even Portland for it.” They need travel far no more: Rose and Tigerlily have a warehouse full of the stuff, and expect that it will go quickly — delivered in the store’s own biodiesel- fueled delivery van.

Rose and Tigerlily’s philosophy of using green materials has extended to their remodel of the old Hand to Land space. “The entire upstairs is built with particle board,” Rose explained, “which is practically soaked in formaldehyde. We didn’t want to throw it away and further denigrate the environment, then replace it with more wood that required killing more trees.” Instead, they coated it with the Safecoat. Additionally, 80 percent of the lumber used in the model is recycled. “We used all the products that we sell, and turned our showroom into a showcase for them,” Rose continued.

Customers who aren’t familiar with the green materials will have help available to them in the form of Amber Schlagenhauf, “who’s a sustainable- building consultant and designer,” Rose explained (they also carry a number of books on green building, biodiesel, and solar power). In addition to bedding and building materials, the store also offers a large variety of other eco-conscious products, such as carpeting (“wool and hemp without the chemicals”); household cleaning supplies, wax finishes, and septic tank treatments; Pacific Rim Woodworking bed frames (“sustainably-harvested maple with non-toxic finishes”); and non-toxic, Teflon-free kitchen supplies. “For example, we have sippy cups in stainless steel and glass,” explained Rose. “We’re about replacing all of that stuff, because babies are drinking out of plastic, which contains cancer- causing hormone disruptors.”

The expansion has largely been made possible by the business’s web site, organicgrace.com, and by advertising in Mothering magazine. “Fifty percent of our business is on the internet,” Rose explained, “and that’s a big part of the reason we’ve been as successful as we have. We ship all over the country, as well as to Puerto Rico, Alaska, Canada, and England.” The move into the new space has been well-received: “The whole community’s been so supportive, and really happy that the place has been fixed up and is going to be a booming, productive part of Main Street.”

Rose and Tigerlily plan to expand the sustainable- building line to include more FSC (Forest Stewardship Council) certified lumber, salvaged lumber, and other sustainable building products. “One thing we’re trying to do here is create a resource, a gathering place for people who are into green building, into earth-friendly products, and we want to connect our customers with the contractors and builders who are experienced or interested in using these products,” Rose concluded. And along with expansion of the business, grand-opening week brings another sweet milestone: little Grace, after whom her parents’ store was named, will be 2 on Oct. 11.