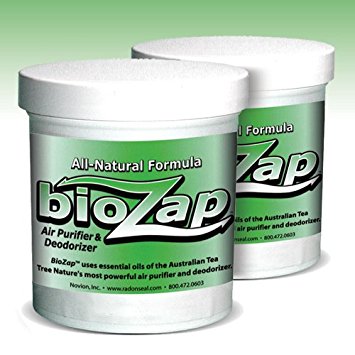 If persistent, noxious odors are invading your home or basement look no further than BioZap Air Purifier and Deodorizer to purify your living space from unpleasant smells. BioZap utilizes the unique powers of Australian Tea Tree Oil and is particularly effective in areas where musty odors are caused by molds and mildew, such as basements, crawlspaces, boats, and water-damaged buildings.

Simply remove the lid of the BioZap jar, place it in the affected room, and allow for it to gently release vapors of the essential oil into the air. Released vapors will permeate throughout the living space and into porous materials, like curtains, upholstery, carpeting, and drywall. Over time the vapors will not only "scrub" the air and furnishings of the odors but will also make the air "smell clean."

All-Natural Solution – Chemical solutions will normally mask odors and can even make the situation worse. The Australian Tea Tree Oil does not just mask odors with a scent but breaks them down. Unlike man-made cleaners BioZap contains no synthetic scents or harmful VOCs and the vapors of the Australian Tea Tree oil are not harmful to humans or pets. The essential oil used is classified as non-hazardous.

Where BioZap is Being Used

BioZap is used against mold and mildew odor so it's most common use is in musty smelling basements and crawlspaces. Place jars in living spaces with high humidity or during periods of muggy weather (A/C systems cannot reduce humidity enough) which are prone to molds and mildew:

BioZap is also effective against body odor, pet odor, and smoke odor making it ideal for use in gyms (used in various Fitness Edge® locations), locker rooms, kennels, and for restorations. Use for confined or gathering places to eliminate body sweat and pet odors:

Deodorize Smelly Furniture, Clothing, and Books – Normally, these items have to be discarded but BioZap has proved successful in salvaging them. Place the affected items in a smaller dry room like a garage or a tent and spread them out or hang them up to allow access of air. Use several jars of BioZap Air Purifier and a fan to blow the vapors over the items.